The journey that I will remember for a lifetime is a road trip through the land of ice and fire. I am writing these lines, and I see pictures of vast expanses and alien landscapes of Iceland in front of my eyes. And that feeling of being a child of nature comes again.

It is in Iceland that you feel the energy power of the Earth, because there are more than a hundred volcanoes, and many of them are active.

The best and the easiest way to see the island is to take a road trip along The Ring Road, where flocks of shaggy sheep and galloping wild horses meet on the way. By the way, for more than a thousand years, horses of only one breed have been living in Iceland. It is simply forbidden to import horses of other breeds into the country.

But I wanted to see the uninhabited and less touristy places in Iceland.Therefore, we decided to replace most of the Ring Road trip with an inland trip to the Highlands Icelandic plateau.

This blog post is an alternative travel guide to Iceland that will help you to design your off the beaten path road trip.

ICELAND OFF THE BEATEN TRACK: HIGHLANDS AND SOUTHEAST ICELAND

DO YOU WANT TO EXPERIENCE ICELAND OFF THE BEATEN TRACK? YOU ARE IN THE RIGHT PLACE

Highlands is a mountainous area without normal roads.

Our path lay through the terrain of lava fields strewn with cobblestones.

In some places, the roads were still covered with snow and ice, even though it was in August.

Other roads turned into rivers that we had to cross by car. Fortunately, they were shallow.

The stories of tourists drowning cars in Iceland are very frequent.

So, here is our itinerary of one of the most impressive areas of the land of ice and fire.

Hooray! We are in Iceland!

Although I watched photos of the country before the trip, I was staggered by the l Martian landscapes of Iceland right after getting off the plane.

The music of Asgeir and Sigur Ros conveys well the mood of Iceland.

I highly recommend preparing a playlist of Icelandic music before your trip.

Only in Iceland can you truly understand Icelandic music. It could only be born here.

On the first day we hung out in Reykjavik and prepared for the road trip.

There are not many shops outside the capital.

Therefore, we bought everything necessary for the entire duration of the trip in Reykjavik:

a lot of meat, everything for grilling, enough food and drinks until the end of the trip, a cooking stove, disposable cardboard plates, forks, spoons, toilet paper, garbage bags, and wet wipes.

After 2.5 hours driving from Reykjavik, we stopped for trekking in the Þórsmörk (Thorsmork) valley.

This place is named after Thor, the Scandinavian god of thunder.

Do you remember the 2010 Eyjafjallajokull volcano eruption that paralyzed all of Europe's air traffic?

In the valley of Thor, you can see its stream of ash and lava after the eruption.

The viewpoints in Thorsmork valley are endless. Every 100 meters you walk there is a new unusual landscape.

Here you can spend several days hiking in the mountains, along the cliffs, to waterfalls, volcanoes, and glaciers.

But we moved further towards Landmannalaugar.

On the way we stopped near the volcano Hekla.

It is one of the most famous active volcanoes in the world.

On this plate it just says that Hekla is a very insidious volcano.

The eruption may begin without warning.

Since it is the most active volcano on the island, you need to have your phone turned on: special services will send you SMS with information about the beginning of the eruption.

You can also install the 112Iceland application. It works even if the mobile connection stops working and in places where there is no coverage. The bottom line is that the application collects your GPS data. In case of danger, if you get lost, fail underground, get stuck or a volcano eruption begins, you can send your GPS-location with one click. So rescuers will be able to respond faster and find you.

I downloaded this application and regularly sent my GPS data because several times I really was scared when we drove uphill on snow and ice or crossed the river by car. There was nobody around us, not a single another car that could help us in case of an emergency. Thank God, it was not necessary to save us, but I felt better mentally with this additional "insurance" .

According to an ancient legend, the souls of sinners pass through the mouth of Hekla on their way to hell. Therefore, Icelanders call this volcano "the gate to hell."

The volcano received the name Hekla because of the frequent cloud cover at the very top, and the word Hekla itself means a short cloak with a hood.

Over the past millennium, the volcano has produced one of the largest volumes of lava in the world: about 8 square kilometers.

The main route goes to the top of the volcano.

Walking there takes about 3 to 4 hours.

Hekla is expected to awaken again soon. According to scientists, a speedy eruption is indicated by the intensity of magma movement in the depths of the volcano. So be on the alert if you are planning to climb this volcano.

We arrived at the surrealistic Landmannalaugar place with rhyolite colored mountains.

The name translates as "the bathhouse of men of this land" because there are numerous thermal springs.

It was so nice to take a bath in hot springs after tracking.

The most beautiful track takes 4 days. But if you are short on time, take the one-day trip and you will remember it forever for its red and orange mountains.

Landmannalaugar is only available for tourists from late June to late September. During the rest of the year, roads become impassable for ordinary vehicles.

We delved into the most non-tourist places in Iceland.

In the heart of the Highlands we reached Nyidalur.

It is an ideal place to experience the truly remote, but often extreme conditions of high altitude.

There are several trekking paths for hiking in the valley, and you can stay for the night in huts near the Icelandic Tourism Association.

The huts are located at an altitude of about 800 m above sea level at the mouth of the valley. They have a kitchen and a sleeping room, which can accommodate 120 people in bunks or on mattresses. The kitchen has stoves, pots, and pans. You can stay at the hut for free, but a donation to support the infrastructure is welcome.

Nyidalur has a small base for the Icelandic Search and Rescue Association. If the adventure goes wrong, there is hope that you will be saved.

Apart from the lifeguard station, there is nothing else here: no shops and no gas stations.

Driving is permitted only on roads marked on maps. Here, as elsewhere in Iceland, off-road driving is completely prohibited by law.

Although their so-called roads in the center of Iceland are actual off-road meaning you will not see "proper" roads.

I have never seen more extreme roads in my life than in the Highlands! Because alpine soil is delicate, damage caused by off-road driving can be healed for decades.

The high altitude of the area means that it is inaccessible to conventional transport, except in summer and early autumn. Before traveling here you need to take all precautions, as you can expect any weather, even in July.

The many-hour journey along the puff cake of black lava fields led us to the most incredible crater of the volcano I have ever seen - Askja.

This is a geological phenomenon of the so-called “center of emptiness”. I’ll write a separate post about it and post the video.

We spent the night near Askja.

There I saw the first dance of the northern lights in my life.

So, Askja is one of the best places in Iceland to see northern lights.

The next day we went to the Vatnajökull glacier, the largest in Iceland.

The most beautiful thing to see here is the ice caves. 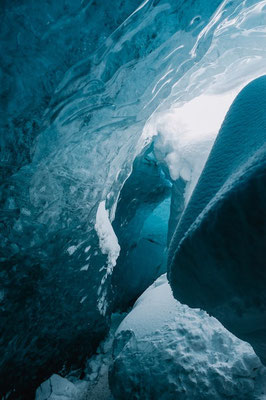 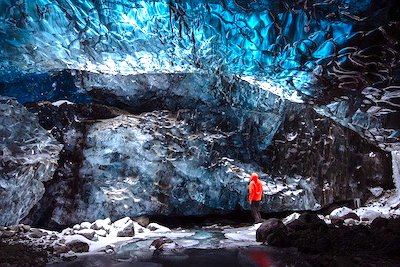 Over the years, the water has sharpened numerous passages under a huge mass of ice. These tunnels on a sunny day look just fabulous.

Due to the different thickness and structure of ice, all the shades of blue shimmer like the northern lights.

The remaining part of the day we spent by riding on a plateau of Highlands. We saw only a black landscape and nothing alive.

Moreover, we fell into a sandstorm of black lava sand.

Driving a car in such conditions was unrealistic and certainly not for the faint-hearted.

Somewhere along the way we found fresh lava.

Signs were prohibiting walking on it, because there was a risk of falling underground.

But since the new lava is layered on the old, there was still a safe path that led to a hot river from under the lava. There we took a bath after the long trip.

At the end of the day we finally got out of the lava fields. Frankly speaking, I had enough of  these endless black landscapes.

How happy I was to see the piercing green vegetation of the eastern part of Iceland and its dwarf forests.

And then the landscapes revived even more: the eastern coast of Iceland is cut by mighty fjords.

We just drove along the coast, sometimes stopped for trekking and absorbed the harsh beauty of northern nature. 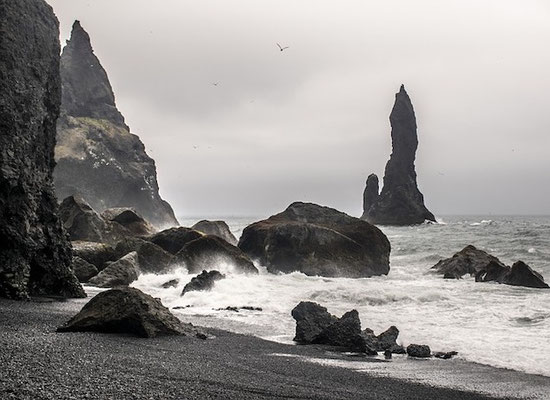 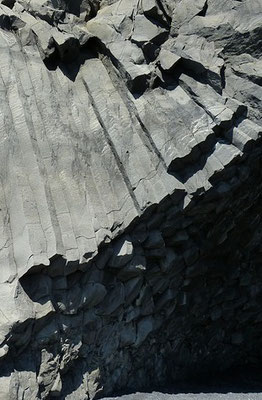 The seventh day surprised us with a black beach and basalt mountains in the village of Vik. It is a natural place of power.

We met a sunset in the glacial lagoon Jökulsárlón, and wandered into the lesser-known Fjallsárlón.

Read about these glacial lagoons here: 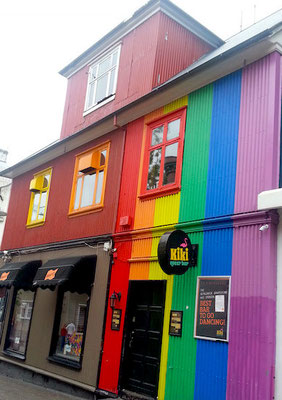 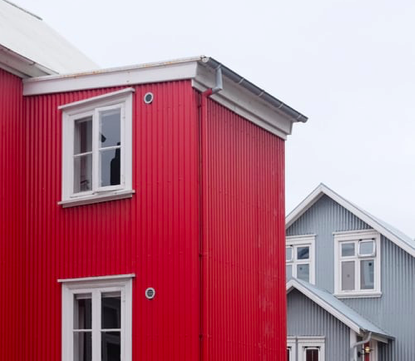 The ninth day we have been exploring the vibrant Reykjavik with its colorful houses and unique atmosphere.

We went to a live concert, climbed through the galleries, bought hats made of Icelandic wool, tried haukarl, a fermented shark meat.

I will write a separate post about unusual places in Reykjavik.

We decided to celebrate the final day of our Icelandic adventure and at the same time to grieve that soon we had to return home  in the Blue Lagoon.

Read my review of the Blue Lagoon and find all the practical information in this blog post:

BLUE LAGOON IN ICELAND: ALL YOU NEED TO KNOW | SECRETS, PRICES, PHOTOS, REVIEW & HOW TO GET THERE

Get more. Do more.